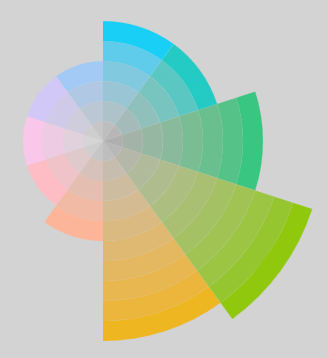 At the beginning of the 20th century, the hypothesis of the existence of three receivers of colors in the visual apparatus was validated. The colors could then be spotted by three numbers and be represented as points in the geometric space. The coordinate system used is a orthonormal whose three axes match the colors red, green and blue primaries defined on the basis of concepts physical and photometry.

So far the needs of the industry and trade have required the setting up of tools and methods of measuring differences between colors perceived at the psychometric level. As an example a manufacturer of car that orders several tons of paint of a given color wishes to be able to check if the product received matches well to the requested characteristics. And when the economic and commercial stakes get bigger the human vision and its subjectivity quickly become insufficient. It then becomes necessary to be able to measure quantitatively the differences in perceived colors.

Briefly the tools and color measurement methods perceived allow to do two things:

– locate this color in an absolute space of perceptual rendering. The term perceptual means that we refers to a space that is the transformation based on the appreciation of a sample statistically representative of human observers, of colors differences in a physical colorimetric and photometric space upstream of the human visual apparatus. The interest of this possibility is that we can deduce the location of the color in different spaces corresponding to materials that have been calibrated from absolute space. The expression perceptual rendering means that differences in colors measured in this space correspond to the differences perceived by the human vision.

This space, or rather these spaces should we say because many have been developed in response to different needs, are three-dimensional just like the RGB space from which they come. We will refer in this article to CIELAB space or CIE L * a * b * 1 976 which is used for surface  colors. The three axes of this system are:

– a * for the yellow blue axis centered around the origin. Blue corresponds to the negative values and yellow with positive values.

Because the absolute spaces of perceptual rendering comply with our vision and are three-dimensional they are radically different from the common representation of the color scheme based on a two-dimensional object, the color wheel.

As an architect, I’m not indifferent to the representation of something so beautiful that color in a three-dimensional  space comparable to the architectural space. This article presents examples simple application of Euclidean geometry in CIELAB space. Simple application because the aesthetic prejudice that prevails in this approach is that what is simple is beautiful.

The purpose of this approach is to contribute to the enrichment of a color vocabulary limited since a long time by a practice based on the color wheel and the hue contrast.  In a second part will be developed the important notion of variation on a theme of colors.